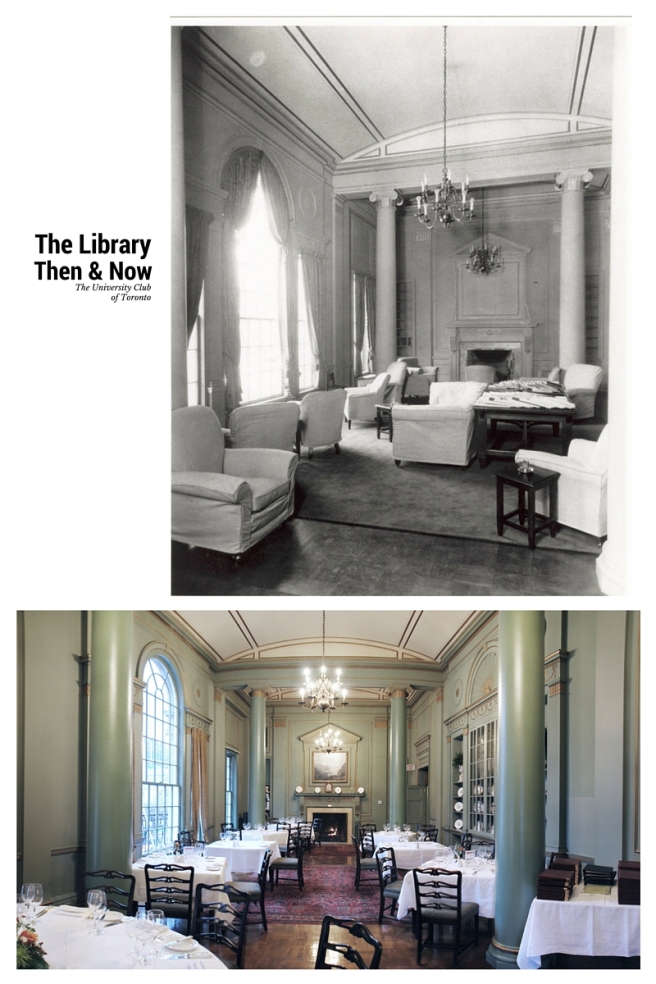 This is the Club’s library and is pure Adam in Style. Where non-structural columns play an important visual role in dividing the room into three distinct segments. The two segments at each end of the library have dimensions in plan similar to those of the so called “Golden Section” Proportion, which is 5 units of width by 8 units of length, a naturally pleasing dimension to the eye.The colour of the library is a distinctive mark of the Adam tradition. The Greenish-Blue colour has been used in many previous buildings in the Adam period. It is said to be Robert Adam’s favourite colour.
The entrance ways of this room were deliberately designed with a low height to enhance the drama of the very high ceilings as you walk into the room.
The piece of art hanging over the fireplace was the first piece in the Club’s present day collection, purchased by the club in 1930. F.H. Brigden enjoyed a long career in the commercial art field, but regularly went on sketching trips throughout Canada. A contemporary of the Group of Seven, Brigden employed a more traditional style that often reflects his appreciation of English water-colours, as in this painting called “Morning Light, Agawa Canyon”. Here he captures a sense of the vastness and hazy morning atmosphere in the Algoma Region of Northern Ontario where members of the group also painted in the twenties.
The photographs on the north wall of the library are of the Right Honorable Roland Michener a member of our club and Governor General of Canada in 1967 and of his wife. Roly Michener was a member of this club from 1929 until his death in 1991. A lifelong sports enthusiast and tennis & squash player into his 90’s, his squash racquets are retired here in our sports facility on the lower levels.
Our Library contains a wide range of books about Canadian artists, but the remainder of the shelves contain a plate collection which includes pieces from Worcester, Minton, Coalport and Spode in England.

5 thoughts on “Doors Open – All About the Library room”